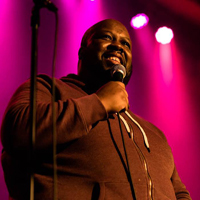 Dante Powell is a comedian from Bernice, Louisiana. He currently lives and performs out of Des Moines, Iowa where he moved in 2012 for a girl, but was too lazy to leave after she dumped him. Dante is best known for a photo of him holding a box of Cheerios that went viral. (He was offered temporary membership into the Illuminati, kinda viral...) Anyhow, if you don't like his stand up, please let him know, and he will be glad to introduce you to some other comedian who may be more your speed. Seriously, just let him know. We all wanna just have a good time! You're probably going to like his stuff, though. He has performed on Green Gravel Comedy Festival (Iowa City), Crom Comedy Festival (Denver), Floodwater Comedy Festival (Iowa City), The Comedy Exposition (Chicago), Beast Village Comedy Festival (Des Moines), Maha Music Fest (Omaha), Lincoln Calling (Lincoln), 10,000 Laughs Comedy Festival (Minneapolis), and Orlando Indie Comedy Festival (Orlando) all while establishing himself as a regular in independent venues across the nation, and garnering regular spots at clubs like Comedy Corner Underground (Minneapolis) and The Hollywood Improv (Los Angeles) Featuring: Jake Gardner and Audrey Farnham hosted by Brad Stewart $7