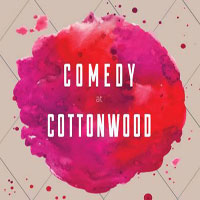 Comedy at Cottonwood is proud to present: Samantha Ruddy! Samantha Ruddy tells jokes, writes funny stuff, and weasels her way into your heart with her girl-next-door charm. At the age of 25, she’s headlined Carolines on Broadway and has been featured at national comedy festivals like New York Comedy Festival, San Francisco Sketchfest, and Bridgetown Comedy Festival. She's done shows like Whiplash at UCB, Night Train with Wyatt Cenac, and the Stella Classic Nightclub Show. Brooklyn Magazine called her one of Brooklyn’s 50 Funniest People, and BUST says she’s a comic “you should be obsessed with.” Samantha’s open-hearted comedy is clever, disarming, and sly. Read her writing on Collegehumor, Someecards, and Reductress, check out a show, and follow her on Twitter @Samlymatters. You’ll be glad you did. And she will too! Also featuring comedy from Los Angelas comedians: Tara McGorry Robbie Bruens Aubrey Jacobowitz This is a stacked all-ages show that you don't want to miss, and I gaurentee you can't have more fun for $5! $5 cover. Doors at 8:00 / Show at 9:00 Thanks for making Lincoln an awesome place for comedy everyone!