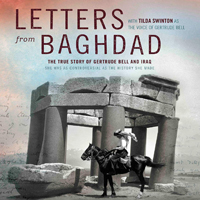 Influential Arabist Gertrude Bell is brought to life in a carefully researched LETTERS FROM BAGHDAD, opening at The Ross on Friday, July 28, that features a wealth of archival footage accompanied by Tilda Swinton’s voiceover. {LETTERS FROM BAGHDAD is] A carefully researched documentary that uses an extraordinary wealth of appealing archival footage accompanied by Tilda Swinton's voiceover as Bell. –Jay Weissberg, Variety It provides a sturdy, often exhilarating bridge between the present and a past that not only isn't distant, but isn't even really past. –Ann Hornaday, The Washington Post You emerge from the film with a divided heart: thrilled to hear of a woman who, ignoring the dictates of the age, filled her days to overflowing, yet ashamed to measure your own days and to find them, by comparison, hollow and bare. –Anthony Lane, New Yorker LETTERS FROM BAGHDAD is showing at the Mary Riepma Ross Media Arts Center on Friday, July 28 through Thursday, August 3. Show times are available at www.TheRoss.org, by consulting your newspaper, or by calling the MRRMAC film information line at 402.472.5353. This program is being presented with the support of the Nebraska Arts Council and the Nebraska Cultural Endowment. LETTERS FROM BAGHDAD tells the extraordinary and dramatic story of Gertrude Bell, the most powerful woman in the British Empire in her day. She shaped the modern Middle East after World War I in ways that still reverberate today. More influential than her friend and colleague Lawrence of Arabia, Bell helped draw the borders of Iraq and established the Iraq Museum. Why has she been written out of history? LETTERS FROM BAGHDAD is the story of a true original—Gertrude Bell—sometimes called the “female” Lawrence of Arabia. Voiced and executive produced by Academy award winning actor Tilda Swinton, the documentary tells the dramatic story of this British spy, explorer and political powerhouse. Bell traveled widely in Arabia before being recruited by British military intelligence to help draw the borders of Iraq after WWI. Using never-seen-before footage of the region, the film chronicles Bell’s extraordinary journey into both the uncharted Arabian desert and the inner sanctum of British male colonial power. With unique access to documents from the Iraq National Library and Archive and Gertrude Bell’s own 1600 letters, the story is told entirely in the words of the players of the day, excerpted verbatim from intimate letters, private diaries and secret communiqués. It is a unique look at both a remarkable woman and the tangled history of Iraq. The film takes us into a past that is eerily current.