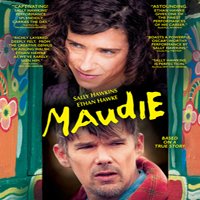 Opening at The Ross on Friday, July 28, MAUDIE's talented cast -- particularly Sally Hawkins in the title role -- breathe considerable depth into this true story about folk artist Maud Lewis. As unassuming and gentle as its subject, MAUDIE breaks your heart with its infectious positivity and an outstanding Sally Hawkins, who can always be relied on for an emotionally sturdy, big-hearted performance. –Tomris Laffly, Time Out A portrait of the artist as a hermit wife that overcomes some clunky early brushstrokes to achieve a genuine grace and considerable poignancy. –Robert Abele, Los Angeles Times “MAUDIE” is one of those movies that triumph over their worst instincts (and your well-honed doubts). –Manohla Dargis, The New York Times MAUDIE is showing at the Mary Riepma Ross Media Arts Center on Friday, July 28 through Thursday, August 10. Show times are available at www.TheRoss.org, by consulting your newspaper, or by calling the MRRMAC film information line at 402.472.5353. The Motion Picture Association of America has rated MAUDIE PG-13 (for some thematic content and brief sexuality). This program is being presented with the support of the Nebraska Arts Council and the Nebraska Cultural Endowment. MAUDIE is based on the true story of folk artist Maud Lewis (Sally Hawkins) and the unlikely romance between Maud and a hardened reclusive bachelor, Everett Lewis (Ethan Hawke). Maud, a bright-eyed, intelligent woman, hunched with crippled hands from arthritis, yearns to be independent and to live away from her overly protective family. She escapes her solitary existence in her aunt’s home through her art, dreaming away the days, until in her early 30s she finds, and answers, an advertisement for a housekeeper. Everett Lewis is a 40-year-old bachelor who owes nothing to anyone. Tall, skinny and shabby, abandoned by his parents at a very young age, he has nevertheless managed to become a proud and self-sufficient man, largely by collecting scraps and peddling fish. He lives in a 10x12 foot house that has neither running water nor electricity, but at least it’s all his. He is his own boss and has everything he needs, except maybe a woman to clean the house and cook his meals. When Maud answers the ad, Everett hesitates at first. Seeing this strange looking woman - short, hunched over, with gnarled up hands and two huge bright brown eyes, he can’t imagine she can handle the hard work. She is determined though and refuses to leave, so he hires her, but remains wary. She talks too much, has too many opinions, is a terrible housekeeper and keeps talking marriage whenever he tries to have sex. She spends most of her time painting doodles on cardboard and the walls of his house. Everett realizes he hardly got what he bargained for. But over time, Everett starts to need Maud. When she isn’t near him, his life is dull and grey. She understands him in a way that no one ever has and she loves being needed by him. Their bond grows deep and unspoken. She continues to paint. He begins to take over the housework. When they realize people will actually buy her cards and paintings, he supports and encourages her. Maudie’s determination for her art, along with her partnership with Everett, blossoms into a career as a famous folk artist, bringing them closer together in ways they never imagined.