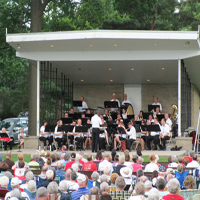 The Lincoln Municipal Band is pleased to announce the 2017 Summer Concert Series. Performances are held Sunday evenings in July and August at 7:00 p.m. at the John Shildneck Memorial Bandshell in Antelope Park, Lincoln, Nebraska. Admission is FREE. The Lincoln Municipal Band invites audiences to bring a picnic dinner, blanket, lawn chairs, and enjoy the beautiful evenings in the park with family and friends! The series features a variety of themes to suit all musical tastes. The line-up is as follows: August 6 · Yesteryear: Music from the Greatest Generation Conductor: Bob Krueger Soloist: Deborah Bouffard, trumpet August 13 · An American Salute: A Tribute to Those Who Serve Conductor: Bob Krueger Soloist: Scott Anderson, trombone Come and join the Lincoln Municipal Band as it continues one of Lincoln’s oldest traditions at over one hundred years. The first concerts were held in 1907 at State Fair Park and then moved to Antelope Park in 1911. These free concerts are the most popular events of the Lincoln Parks and Recreation summer performance series and boast regular crowds of more than 1500 citizens from Lincoln and its surrounding communities.