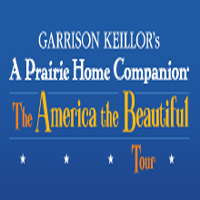 Garrison Keillor’s Prairie Home Love and Comedy Tour with Rich Dworsky & The Road Hounds, Fred Newman and Heather Masse. Garrison Keillor’s Prairie Home “Love and Comedy” Tour 2017 is coming to Pinewood Bowl Theater in Lincoln, NE on Saturday, August 12. Prairie Home Love & Comedy Tour is two-plus hours of stories, love duets, Guy Noir, Cowboys, poetic outbursts, and our famous Singing Intermission at which the Eager & Able-Bodied stand and sing around the campfire. Garrison Keillor celebrating his 75th, with the extraordinary Heather Masse, sound-effects genius Fred Newman, Richard Dworsky and the Road Hounds. Garrison Keillor Garrison Keillor was born in Anoka, Minnesota, and began his radio career as a freshman at the University of Minnesota, from which he graduated in 1966. He went to work for Minnesota Public Radio in 1969, and from July 6, 1974, through July 1, 2016, he created and hosted his popular variety show, A Prairie Home Companion. His many books include Lake Wobegon Days, The Book of Guys, Pilgrims: A Wobegon Romance, Guy Noir and the Straight Skinny, and The Keillor Reader (Viking). He is the host of the daily program The Writer’s Almanac and the editor of several anthologies of poetry, most recently,Good Poems: American Places (Viking). In 2006, Keillor played himself in the movie adaptation of his show, a film directed by Robert Altman. In 2007 he opened an independent bookstore, Common Good Books, in St. Paul, the city where he and his wife make their home. Heather Masse Growing up in rural Maine, Heather Masse sang hymns and folk songs around home with her family. Now based in New York, this New England Conservatory of Music alum is a one-third of the Juno Award-winning Canadian trio The Wailin’ Jennys. Lock My Heart is her recording with piano legend Dick Hyman. A new album, August Love Song — in which she joins forces with trombone great Roswell Rudd — was recently released on Red House Records. Fred Newman Sound effects man Fred Newman is an actor, writer, musician, and sound designer for film and TV. Turns out, no one is more surprised than Fred that he’s made a career out of doing what he used to do behind the teacher’s back — crossing his eyes, making sounds, and doing voices. He readily admits that growing up, he was unceremoniously removed from several classrooms, “once by my bottom lip.” Rich Dworsky & The Road Hounds Keyboardist, composer, arranger and longtime Prairie Home Companion music director Richard Dworsky has collaborated with such diverse musicians as Yo-Yo Ma, James Taylor, Brad Paisley, Kristin Chenoweth, and Sheryl Crow. He has provided music for documentaries on HBO and PBS and has released many recordings of original material, including his latest, All In Due Time. Bassist Larry Kohut has played on dozens of albums and many film scores, as well as performing with jazz artists such as Patricia Barber, Mel Tormé, Vincent Colaiuta, and Tony Bennett. In addition, he is an adjunct faculty member at Columbia College Chicago, where he teaches acoustic and electric bass. When Richard Kriehn turned 10, his mom bought him a mandolin; at 19, he’d won the Buck White International Mandolin Contest. He went on to play with the Nashville Mandolin Ensemble and bluegrass group 1946. On the classical side, he has performed with numerous orchestras and was principal second violin for the Washington/Idaho Symphony. Bluegrass to big band jazz, Chris Siebold knows his way around a guitar — or a bunch of other instruments, for that matter. Based in Chicago, he draws from a deep well of influences and styles and has put his talents to work in ensembles such as Howard Levy’s Acoustic Express and Kick the Cat. In 2010, he formed the band Psycles, whose album Live at Martyrs’ was released the following year. Tickets can be purchased at the Pinnacle Bank Arena Firestone Farm Tires Ticket Office, online at ticketmaster.com, all Ticketmaster locations, or charge by phone at 1.800.745.3000.