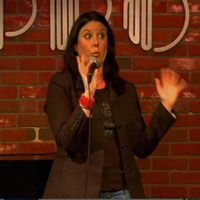 Boston native Courtney Cronin-Dold has over 20 years experience in stand-up comedy and television writing. Her act consists observations on pop culture, life as rock and roll super fan, her love for gambling, and her traditional German husband who continuously tries to tame her wild side. She has performed regularly at over 100 comedy clubs and theaters including the Laugh Factory and The Improv in Hollywood. Being a native of Boston, Courtney cut her teeth at all the top New England clubs and has been featured on the College Humor Comedy Tour, San Jose Brew Ha-Ha, The Boston Comedy Festival, and The Detroit Comedy Festival where she headlined the all female showcase. She is also the only female comedian to perform on the Kiss Kruise for the band KISS and is a featured guest on dozens of KISS fan related podcasts and live events. Some of her on camera television credits include the E! “talking head” shows “Forbes Celebrity 100” and “Forbes Celebrity Weddings”, and her finest moment as an actor was delivering a phone message to Larry David on “Curb Your Enthusiasm”. Most recently she was featured as herself with Bob Zany on Showtime’s “Gigolos” as the writers they hired for a roast and the hit TBS comedy; “Separation Anxiety” hosted by Adam Ray and Iliza Shlesinger where she was featured on camera in all 24 episodes as “Courtney the producer.” Some of her TV writing credits include head writer of “The Rock and Roll Roast of Dee Snider,” “The Roast on the Range of Corey Taylor.” Other credits include, “Socially Offensive Behavior” hosted by D.L. Hughley and many, many others. Tickets for this very special show will be $10 and are available at the Zoo Bar or at: https://www.etix.com/ticket/p/3438600/courtney-cronindold-lincoln-the-zoo-bar