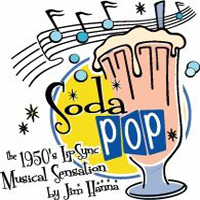 Soda Pop is an extremely funny lip sync musical set in the late 1950's Americana featuring some of the best comedic actors in Lincoln performing iconic musical hits within a silly irreverent play. The play both makes light of and an homage to the seemingly "innocent" days of that time period. Directed by Tom Crew, who was in the original cast in 1990, the play has been since produced all over the country. This will be the last time Tom Crew and his cast will be performing it, and we are very excited to end our history with it at The Haymarket Theatre. Don't miss this hilarious 1950's Lip Sync Musical! Get your tickets on line now!!